Thirteen years ago I wrote down a Life List.  It was a list of 136 amazingly-blow-my-mind things I wanted to do during my life.  Some people call it a Bucket List but considering the reason it’s called a Bucket List is that it’s a list of things they want to do before they “kick the bucket”, I couldn’t embrace that title.  To me, that sounded depressing.  I wanted to focus on life as an ever-evolving journey and not a series of steps that slowly moved towards death.

On that list, number 72 was “Eat French toast in Paris with the one I love”.

Three years ago, on our seventh anniversary, I wrote down what I wanted to see with my life in the coming five years.  I was pregnant with Maggie.  We already had a 5 year old and 3 year old.  I wrote in my journal that I wanted to celebrate our tenth anniversary in a big way…maybe even in Paris.  I remember giggling as I wrote it because in all honesty, it didn’t seem possible.  There was so much going on in our lives – building a business, raising a family, being involved in our community, and more.  Paris, quite honestly, seemed like a pipe dream.  I found that journal about three months ago and read that entry.

Tom and I leave for Paris later this month, two months shy of our tenth anniversary.

To see this come to reality is overwhelmingly exciting for me.  Some beautiful steps fell into place for us in order to make this happen.  We had an amazing opportunity with family to take part in an event in northern France.  My mother in law and my sister-in-law both are available to take care of our kids for the week that we are gone.  We are in a place in life where we can leave our practice for a week together (we own our Chiropractic practice together).  I really believe that the intention I have put into being in Paris with the one I love has allowed for all of the little pieces to fall into place perfectly.  The Universe totally conspired to make this happen and I am so so grateful for all that came together in order to for us to take this trip.

If you had asked me thirteen years ago that by writing “Eating French toast in Paris with the one I love” would lead to “Celebrating our tenth anniversary in Paris” which would lead to actually going to France with Tom this summer, I would have thought you were nuts.  But it hit me a few weeks ago, when I came across that journal entry, that the power of intention is so profound.  It wasn’t something I manifested every single day.  It was something I wrote down twice in my life.  But the intensity with which I wished for it, while writing it down,  was massive.

And today, I took some time to research and plan this trip that I have the honour of taking.  We are taking part in a ceremony in Arras, France on the 100th Anniversary of Vimy Ridge.  We will be there for the re-patriation of soil between Vimy Ridge and Base Borden.  We are attending with family – my Dad, stepmom, brother, and sister-in-law – and the ceremony aside, I’m really looking forward to family time.  After the events in Arras, Tom and I are spending four days in Paris.

This alone is exciting and while I hate to admit it, I have a pang of anxiety with it.  I’ve left all three kids before two or three times, but never without Tom being home with them.  This is for a whole week and family is happily going to be watching them while we are on this trip.  I know they will be fine but the Mama Bear in me is feeling anxious for sure.

But while focusing on the positive…we have seven days together as a couple.  An early honeymoon in honour of ten amazing years together.  Somehow, I feel that when I hold my husband’s hand while walking along the Seine, I’ll realize that not only are our kids okay but this is good for all of us.  A little time away to celebrate the awesomeness of our relationship. 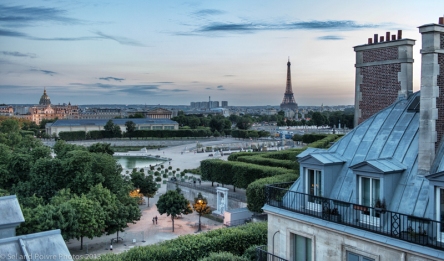